The morning came too soon for all of us, considering our late night. And the spacious hotel room was so comfortable that we all groaned when the alarm went off at 6:00 am. Somehow we managed to stumble out the door by 6:30 and load up the car for Puget Sound. At the Anacortis harbor we hopped a ferry to Friday harbor, just a stones throw from the Canadian border. The itinerary today was a kayaking expedition in the San Juan islands. This is one of those bucket list items for Brian and I and it seemed unbelievable that we were actually doing it. Admittedly I was as nervous as I was excited. The air was downright cold and the 40 degree water is frigid even for those much tougher than I. We had packed as light as possible for this road trip, and trying to be prepared for all possible types of conditions was... futile. I tried not to think about the warm clothes I had back at home that would have made this outing more comfortable. I was also nervous about how the kids would do with so much paddling, given their limited experience with kayaking. This was a six hour excursion. And we were going to be in Orca territory! What if we didn't see any after all the effort and money we put into this? And what if we did see one, a close one?! Too close for comfort? Would Clara start screaming or crying? What if I had a panic attack?

Somewhere on the ferry ride the sun broke through the clouds and it started to warm up. It looked like it was actually going to be a gorgeous day. Our taxi was waiting for us at the harbor and everything was going smoothly. After lathering up with sunscreen and getting the 101 on sea kayaking we launched from San Juan park. The paddle was tough in the ocean water, and we got stuck in bull kelp a few times but we persisted... Chase and I were paired in a tandem kayak and didn't have near the manpower as the other kayaks in our group. I paddled my heart out trying to keep up. Our guide Pat, told us all about the impressive Orca activity that has been taking place over the past couple weeks. "We easily have an 80% chance of seeing them today," he said confidently. "Yesterday they were everywhere! Hunting salmon, breaching, joining up with other local pods and having some kind of meet and greet ritual, playing in the coves, etc... We were about an hour late coming into shore yesterday afternoon because we were literally blocked by Orcas."

About two hours into the trip and still no sightings Pat had become much quieter. Eventually he began pointing out the 'fascinating' jellyfish and sea hair (it looked like seaweed). We did spot a couple seals and a bald eagle... Cool but nothing we hadn't seen before. Nothing worth the trek we'd made to kayak with whales. Eventually we stopped on a beach for lunch and the mood in our group was noticeably deflated. Clara and Brian were probably the only two still acting chipper. Pat kept saying "it's not over till it's over." We all stared intently, fixated across the 8 mile stretch of water in between USA and Canada, where supposedly thousands of whales pass through during the month of July. I tried to tune out the corny jokes our guide had started telling out of sheer desperation. He could tell he was losing us. We let the current do most of the work drifting us back into the cove after lunch. My sore arms and shoulders were grateful. And before we knew it the trip was over. We. Saw. Nothing. Nada. Zilch.

I was so disappointed! I kinda wanted my money back. I'm 'that person' who thinks about all the other ways we could have spent our day today. For example, worst case scenario I could have hit the rowing machine at the gym and watched Planet Earth for six hours and saved myself a sunburn and a wad of cash. And I probably would have seen more wildlife! 😂 In all fairness to the San Juan islands, they are very pretty. And if you have no expectations, nothing else to do, and time and money is also no issue, I'm sure paddling around its coast is a great way to spend your day.

I was glad to finally get back to Friday Harbor and sit down with a nice cold coke on a darling garden patio and rest my arms. There were cards on the table and C&C had fun playing Egyptian rat slap while we waited for our food. My crabby mood was softening. I started to reprimand myself for letting ridiculous first world problems bother me, and resolved to try looking on the bright side.

My resolution was short lived. Once on board the ferry we heard the news that one of the other ferries had broken down and our boat was going to need to make up the extra stops between the islands. Our 1.5 hour ride was actually going to be 3 hours. We wouldn't get back to Anacortis till after 9:00, and then we had to drive two hours back to Seattle. Luck was really not on our side today. Clara was hungry (although we'd just eaten) and our batteries were drained on our devices. That was the end of my desire to look on the bright side. I was crabby again. There were two tender mercies: a galley with fresh cut fruit for Clara, and a 750 piece puzzle on our table that some good soul provided to keep passengers entertained! Working on that puzzle (of Orcas, ironically) kept me sane as we zig zagged from harbor to harbor. Brian said the whole situation reminded him of the one and only cruise we took years ago, where our ship broke down in the middle of the Gulf of Mexico!

Wasn't I just saying yesterday how Brian is like a good luck charm and things always work out when he's around? Apparently I spoke too soon. I can say with certainty though that he's chronically optimistic, patient, and makes bad days tolerable. And that's even better than being a good luck charm. 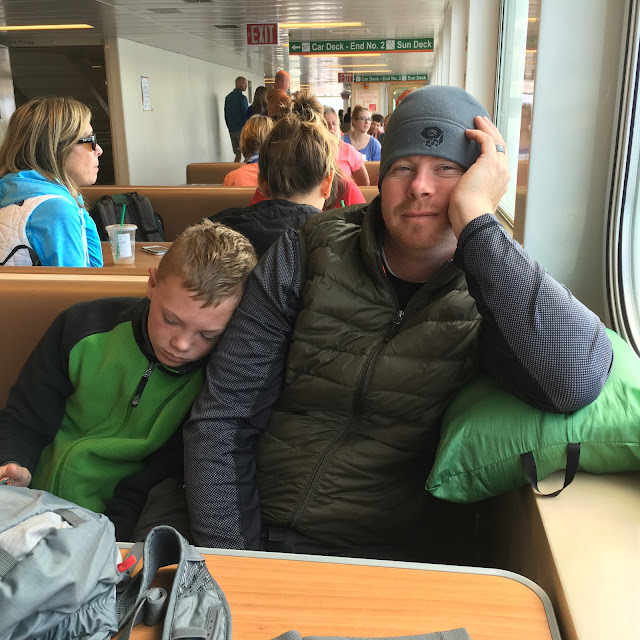 We were so tired on the ferry ride this morning! 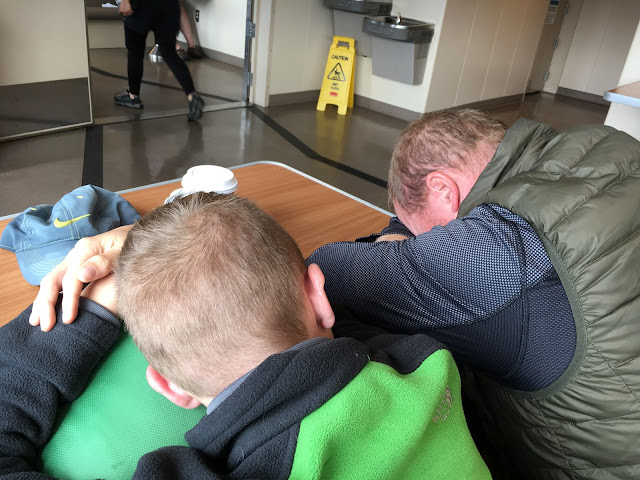 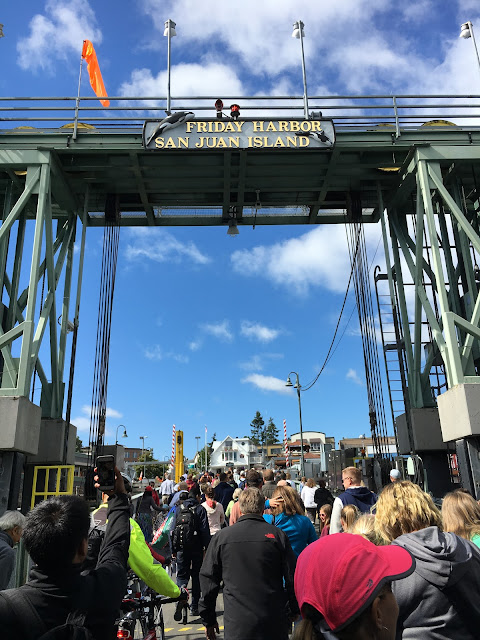 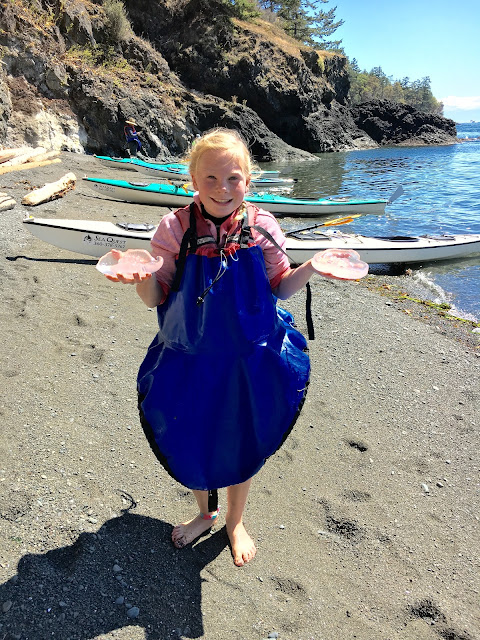 At least Clara was thrilled with all the jellyfish she found 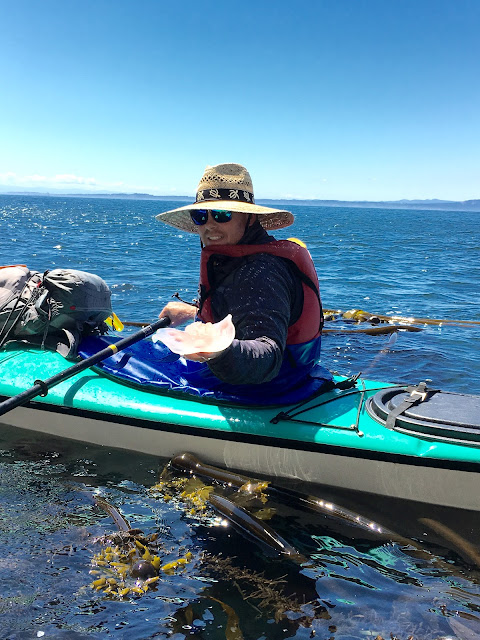 And so was Brian. 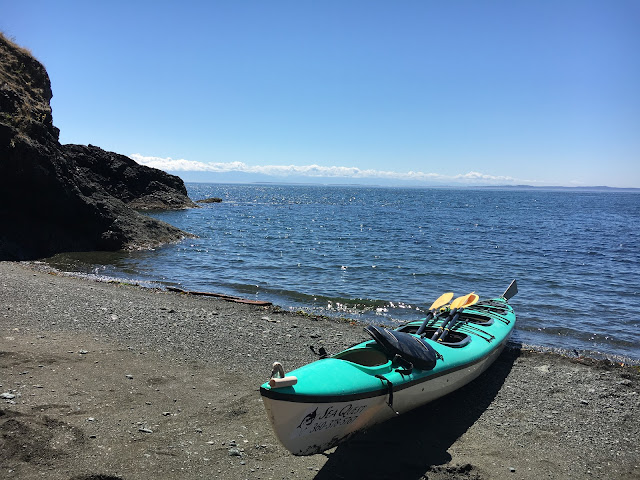 There was a whole lotta nuthin to see today. 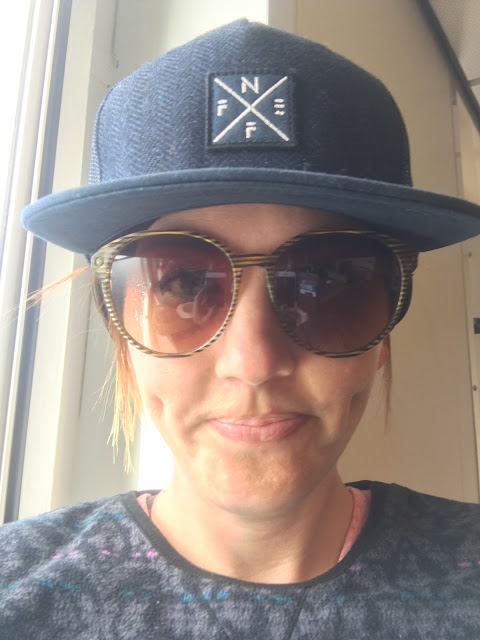 This is my 'get me off this ferry and back to my hotel asap' face.