A Language of Their Own

You know how sometimes kids say something that's completely incorrect, but is so cute that you can't bear to correct them? This post is inspired by Clara's latest little mix-up. She has very sensitive skin and is constantly irritated by seams, tags, and any other itchy, stiff or uncomfortable clothing. Lately she's started to describe her discomfort as 'boring.' She knows boring is a negative term, but apparently doesn't know what it really means. For example, if the seam on her socks or tights is slightly out of place she says: "These socks are TOO BORING!" She often complains about 'boring' sweaters, jeans, dresses, jammies, and even told me in the store the other day that her underwear was boring. She would love to walk around naked if she could... and come to think of it life would be a lot less boring if we did! 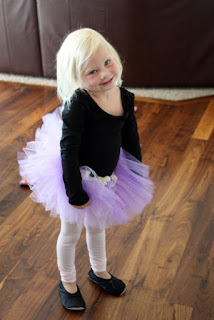 As for Chase, my sister recently reminded me of something he used to say when he was two that I had completely forgotten about, but it used to make me almost cry with laughter. He switched the words 'don't' and 'can't' and also used 'huh?' instead of 'OK.' So when he was going through this little two year old rebellious stage, every time we asked him to do something (like put on PJ's or go to bed) he'd yell "I can't wanna, HUH?!" It was especially funny because he'd be so serious, so upset, and always emphasized the 'HUH!?' at the end. We couldn't help but laugh, and then he'd get even more mad and say "STOP LAUGHING - HUUUHH!?" Hilarious. 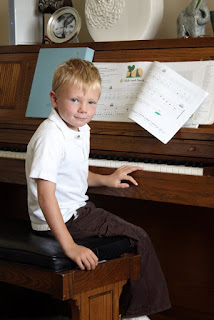 Happy Halloween! Clara was 'Jesse' from Toy Story, and Chase was 'Dracula.' We celebrated the fun holiday with school parades and parties, pumpkin carving, trick-or-treating and tons of candy... oh yeah and a trip to the Instacare. Once we got the kids in their costumes and ready to go, Clara started complaining of a tummy ache. Not too big of a deal (probably the mummy hot dogs), other than she had been around a Friend with strep throat two days before. The last time she had been exposed to strep and had a tummy ache she turned out to have strep herself. We thought before we sent her door to door throughout the neighborhood we should get her tested just to be safe. Of course there were very few Dr. offices open on Saturday night, so we had to go out to Saratoga Springs. The weather was cold and rainy anyway so we hopped in the car and made the trek to the Instacare. Thirty minutes later we were leaving with a clean bill of health, and the rain had stopped! The kids literally hit the road running and didn't stop till they couldn't fit one more piece of candy in their bags. What fun!

So the annual dilemma is what to do with all the candy. When I was a kid, we ate one piece every day until it ran out. Our dentist suggests letting the kids eat as much as they want for one day and that's it. His theory; the kids will make themselves sick on candy before too long, plus they don't get in the habit of eating candy every day and end up with cavities. He even offers to 'buy back' the candy so the kids are more motivated to give it up. It worked for Chase, he got ten bucks for his leftover candy! I have to say I think our dentist is a genius. Especially because when chocolate is laying around, Mom eats it!
Posted by Unknown at 7:07 PM 1 comment:

Chase had two wishes come true this week (none involving pet dragons unfortunately)! First, he lost a tooth at school - meaning he got to go to the office and get a super cool 5 cent plastic treasure chest to keep it in 'till he came home. He's been waiting for two years for this to happen and of course he was thrilled when it finally did. I can just picture him walking through the halls with an ear to ear toothless grin, carrying his prized treasure chest.... hilarious. And this is what he looks like with out his two front teeth. Pretty ironic that he was a vampire for Halloween! 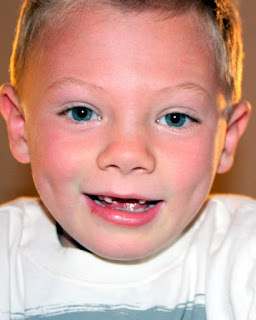 Second, Chase got a red dollar sign stamp on his hand at lunch indicating that his account was out of money. This just goes to show how much I love my son, because it was very difficult for me to let this one happen. I typically would have deposited more money to his account at least a week before it ran out. I even casually said "hey I'm just gonna send a check to the school today for your lunch" more than once, but Chase was adamant that we let the money run out so he could get the crazy stamp. He really wanted the stamp on his forehead (don't ask me why he thought they would do that to a child) but had to settle for it on his hand instead. He also brought home a letter explaining that we had a .30 cent negative balance, and outlining how we could sign up to receive government subsidised lunches! I about died laughing - .30 cents! (Thanks Barack, but that won't be necessary) Anyway, this morning I went in to the school and added more money to the account and the lunch lady told me she'd never seen a kid get so excited about the hand stamp. She said Chase yelled 'Finally!' when she put it on his hand. I really hope he enjoyed the moment because that's the last time we're letting the lunch account run out. :)
Posted by Unknown at 7:08 PM 1 comment: