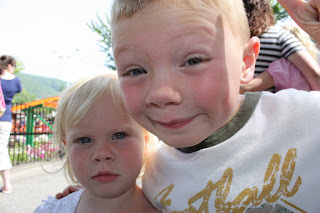 I thought this was hilarious!

Race for the cure

In June, Brian and the rest of 'Team Ebert' rode in a 100 mile bike race sponsored by the American Diabetes Association. 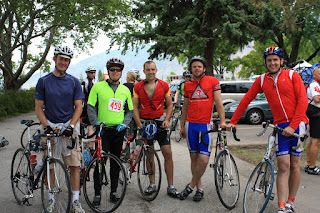 Bri's brother Jeff, has had Diabetes since he was a teenager so it was fun for the team to ride with and for him. Plus Brian is always looking for a challenge to train for! 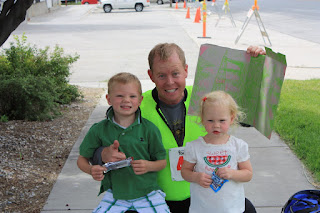 This time the kids made their 'go Dad!' signs on the inside of a cereal box (I was out of posterboard) while they waited for him at the finish line.


After a whole year of being too busy to volunteer in Chase's class (and hearing about it every time another kids parent volunteered) I decided to step up for field day. It was my last opportunity for the year and I had to make it up to Chase. The woman who called looking for volunteers somehow didn't inform me that field day is for fourth, fifth and sixth graders only. So I took Chase to his class wearing athletic clothes and a water bottle instead of a backpack. "See ya on the field!" I said to him as his teacher gave me an odd little look. (I assumed she was just shocked that I was actually volunteering for something.)

I was assigned to the long jump station which was the coveted station because it was in the shade of the portables. I think they felt sorry for Clara and her incredibly fair skin - which I played up a little to seal the deal. Anyway, after two and a half hours of writing down long jump scores and not seeing Chase anywhere, I realized our luck might have run out. I started asking around to the other volunteers and sure enough: kindergarten doesn't participate in field day! Are you serious?!? First I felt like an idiot, then I thought about all the things I could have gotten done that morning other than field day, and most of all I wondered how poor Chase was feeling. After two more hours of score taking (Clara was a champ but even her patience was long gone) I finally got released from my duties and could pick up Chase. His teacher had put his things in a little grocery sack designated for slacker parents who forget to sent their kids with backpacks. Twist the dagger! He was confused - I was sorry... so we had snow cones and talked and all were happy in the end.

Looking back on last years daily hectic mayhem I'm so grateful that I am done working. I'm excited to volunteer on a regular basis in Chase's class this year, and who knows maybe I'll actually get it right! I already signed up to sell school t-shirts on back to school night so we'll see how it goes.


It was on our little trip to St. George that Chase decided to find a wife. If the engagement works out, in about the next 16-20 years this baby will be my new daughter-in-law and Dave & Jill will be Chase's in-laws.

Chase has always loved baby Georgia (he really loves all babies, but has a special place in his heart for this one). While sitting on the couch at the Villa playing with her, he asked her mom "Jill, will Georgia be an adult when I'm an adult?" "Yeah" Jill responded - not really sure where this was going. Then Chase said in all seriousness "Good, then I want to marry her. I love her." At that moment Lily, Georgia's older sister screamed "YOU CAN"T MARRY HER! YOU HAVE TO MARRY ME!" When Dave, Georgia's dad found out about the proposal, he made it very clear that he didn't want Chase anywhere near either of his daughters! Way to go buddy.

Just before school got out we took a trip to St. george with some friends. It was actually a work trip, but the work part consisted of throwing a party (my kind of work) and was over by the end of the first day. The rest of the weekend we got to play!

We stayed in an amazing company owned Villa. It was actually a little too nice for my sweet little children's sticky fingers, so we tried hanging out in the pool as much as possible. Nothing to break there!

We also checked out a new spot in St. George called Pirate Island Pizza (and just found out there's one opening here in Orem this month!), kind of like a chuckee-cheese's with a slightly better menu and ambiance. The kids had a blast. They got SO worn out that they all had a melt down on the way back to the villa. It was so dramatic it was hysterical.

This is Chase making his best "ARGGH" pirate face. Intimidating I know. 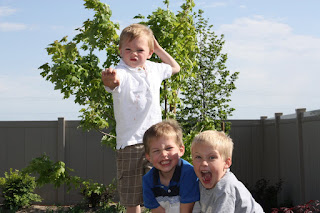 It's no small secret that summer is - well, the best thing ever here in Utah. It's just hard (I think impossible) to mess up. We managed to make it even more exciting by setting up a little play group for Chase and his buddies from our old neighborhood. Adventures in the backyard followed by Popsicles is a good summer day. 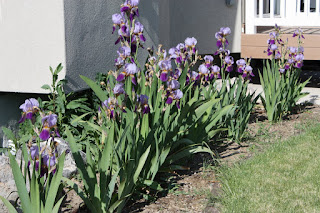 I had to take a picture of my Iris' in the back yard too because I'm still shocked that they grew and bloomed. I got some tiny little starts from a friend two years ago, and they have turned into this! Now I know Iris' are notoriously hearty - easy to grow and thrive yada yada yada... But I am notorious for killing plants and was thrilled as ever to know that I can grow something! Yeah! 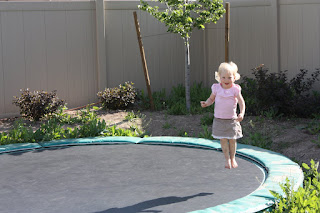 Clara is just about the cutest, stubbornest, most amazing little person ever. I love watching her enjoy life to the fullest. 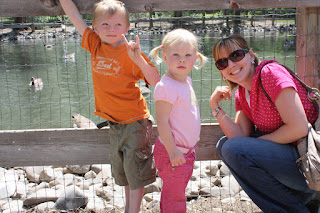 Moving right along to Memorial Day weekend... it was a busy one! Brian went on an early morning bike ride in preparation for a century he was training for. We met up at his parents house for breakfast with the whole fam. I got a speeding ticket on the way... the first one in years! Bummer. The kids sure loved it though. 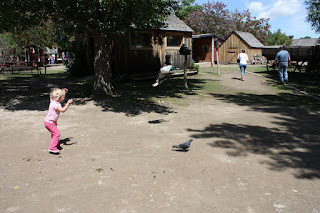 After breakfast we visited historic Wheeler Farm with Bri's family and enjoyed being out in the beautiful sunshine. Wheeler farm is great because it's in the middle of Salt Lake yet it feels like you're in the middle of the country. There are random ducks and chickens wandering and they have all the usual penned farm animals as well. I love the huge trees and pretty ponds. I also love that it's free! 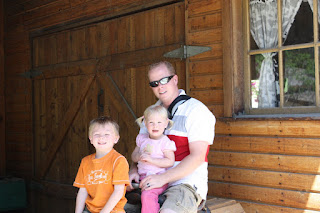 The kids love the tree-houses, feeding the ducks, and going on the tractor pulled hay ride. For a holiday, it was perfectly pleasant and surprisingly under-crowded. 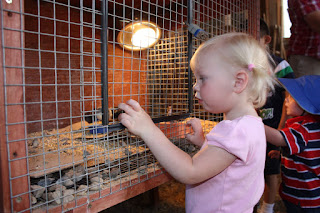 It's amazing Clara still has all her fingers after shoving them through every cage she saw! The animals must be well fed.

Posted by Unknown at 2:44 PM No comments: 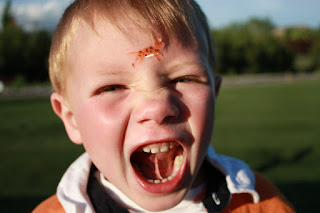 Thanksgiving Point has activities for families every Monday night throughout the summer. They're a tone of fun if you're looking for something to do with the kids for FHE. 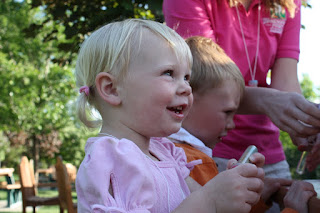 Each week is a different theme. These pictures were taken at the beginning of the summer at the "kickoff" activity. They had face painting, magic tricks, games, etc. 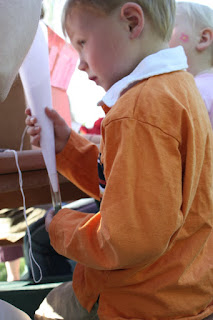 There's always a little craft that the kids can make too. This time it was colored sand necklaces. 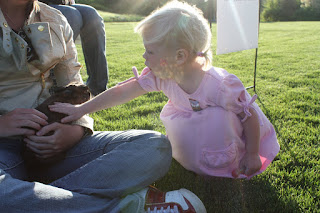 And Clara's favorite part was petting and holding the bunnies. So fun! Have I mentioned I love Thanksgiving Point? :)

Posted by Unknown at 2:28 PM No comments: