Clara, Clara, How Does your Garden Grow? 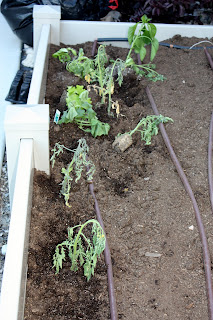 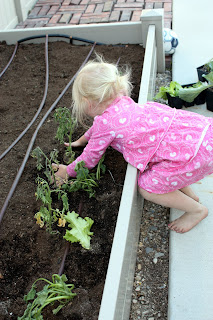 We bought some 'starts' at the local nursery this year for our garden. We had such a cold, wet, spring that seeds were out of the question. Anyway, Clara and her friend Sophia decided to be extra helpful and plant our garden for us. I was inside making dinner when she came running in yelling "MOM! We planted!" She was so proud of herself. I was a little confused, but she quickly grabbed my hand and showed me what she had done. Sure enough, they had randomly dumped all of the plants in a single grow box (we had bought enough for two grow boxes) and tossed the plastic ID tags aside. Of course I had no idea what was what without the little tags, but I was pretty sure nothing was in it's 'spot.' However, Clara was so proud of herself that I decided to let it be. Now that it's October (I'm playing catch-up on the blog again) I can say that it all worked out and most everything grew. Yes it was crowded and looked a little crazy, but we still had plenty of zucchini for making bread!
Posted by Unknown at 9:08 PM