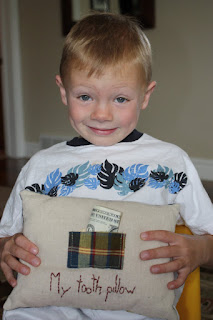 This summer Chase hit a big milestone: losing two teeth! He feels extremely proud and grown up. Now I have to confess that loose teeth and all the gore that goes with them makes me ill. I got weak when I saw Chase wiggling them and couldn't even look when it was tooth brush time! I was really hoping the dentist would yank them (we coincidentally had a check-up scheduled while they were loose) but no such luck. The first one fell out at a friends house and was knocked into the carpet where it was officially declared 'lost'. So we wrote a very nice note to the tooth fairy pleading our case. Luckily she was feeling generous because she left him a paper dollar and a silver dollar in his tooth pillow! The next tooth fell out at home the following day so the tooth fairy was on duty two nights in a row. Unfortunately she was all out of silver dollars so she had to go to Smiths Marketplace where each and every cashier searched their tills on Chase's behalf. No silver dollar turned up, but apparently there are gold dollars in circulation now and one was found in the very last till! FFHHEW! I have no idea why the tooth fairy set the precedence of a coin dollar but once she started it she had to continue it! And here's a picture of Chase's new 'big' teeth that are coming in. 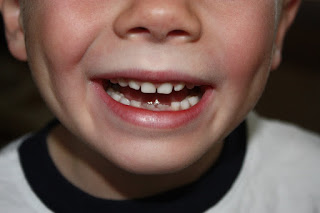