I have had the privilege over the last few months to get together with some long-time dear friends. The latest visit inspired me to document some of the joys of friendship - because let's face it, where would we be without good friends? 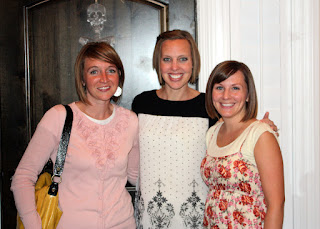 This first picture is of Allyson and Jacque - two friends from AZ - and myself. I've known these girls since sixth grade (a very awkward time for anyone, but especially for me since I had just moved from across the country). There were three other girls in our group of close friends: Jessica, Kyle and Katie. Although we each had different strengths and personalities, we shared the same standards and values (a rare and fortunate circumstance to be in). This picture was taken just before we went our separate ways for college. 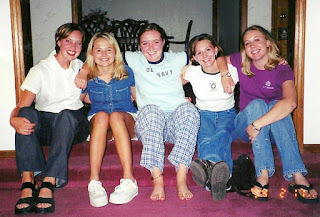 Some of my favorite memories with these girls are:
- high school dances. Yes, we were those girls who did over-the-top 'creative' asking out, hours of planning, clothing coordinating, menu selecting, etc. One time we rented an island (we were totally insane) for our dinner location prior to the dance. After we thought of the idea we wanted to check it out and see if it would work. We borrowed Kyles parent's fishing boat and sailed away. None of us knew what were were doing of course, and somewhere in the middle of the small lake the motor died leaving us stranded with nothing to row with. These were pre-cell phone days mind you. Hours later (at least it seemed like hours) we hit shore and agreed to fork over some cash to rent a real boat & driver for the actual date. It was hilarious... but not at the time!
- STASH. Somewhere along the way we created this little name for ourselves... had t-shirts made that we wore with our dirt-bags and even wrote songs about. The letters stood for something, but I can't recall what. ; )
- Girls camp. All I can say is Camp Lo Mia can't be beat. When I moved away from home and found out that girls in other parts of the country were camping in tents, sleeping on the ground, building fires and cooking their own meals for girls camp I was shocked. How did they get anyone to go? We had it good! We slept in cabins, enjoyed hot showers, and had our meals prepared for us (yummiest cinnamon rolls ever). We visited the craft cabin, the humanitarian cabin, learned basic guitar lessons, played 'big booty' for hours, sang songs, hiked in the beautiful white mountains, performed skits and had dance parties every night, went snipe hunting, told 'Mona' stories and most importantly bore testimonies in the 'sacred grove.' Putting on Camp Lo Mia was no small task for the leaders (I appreciate that now that I'm older) and it was something I looked forward to every year almost as a 'retreat.' I really hope I never get called as a YW camp director here in Utah because I would have a hard time sporting a good attitude about roughing it.
At the beginning of January I was spoiled again, this time with a get-together with my freshman college roommates; Terra, Jocelyn and Amy. It had been several years since we were all together and our visit flew by way too fast. None of us knew each other before college. We came from four different states, and four different lifestyles. We hit it off pretty much immediately though, and I still consider these gals some of my closest friends even twelve years later. Anyone who knows me well, knows what a stubborn, ornery person I can be at times. I consider it a success if I can make it through the day without offending someone. And college was no exception! So to still be tight with my college roommates after all these years says something about what saints they are. 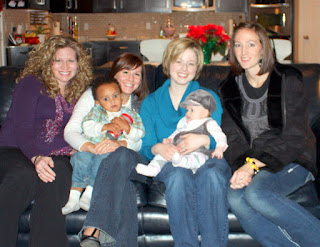 Some of my favorite memories with them are:
- Snowboarding with Terra: Terra is from CA, and I'm from AZ. Needless to say, the climate at Ricks College was our arch nemesis. We decided to 'embrace' the bitter cold and ice that we despised so much and signed up for a snowboarding class. We were bussed up to Targhee once a week and hit the slopes with serious awkwardness. We laughed so hard we cried (or was it the other way around?). Terra was also the 'mom' of the apartment. She ironed our clothes (even if we didn't want her to), cooked well balanced meals and gave the most sound advice. She's still the first person I call when I'm in a pickle. Terra was in the RS presidency, a creative genious and a lifesaver when I sent away 'my missionary.' The most sensitive and understanding person around, I don't think I (or my frozen nostrils) would have lasted up at Ricks without her.
- Eating frosting straight from the tub with Amy: Amy, the other short roommate besides me, had a passion for reality TV even before it was mainstream. She'd sit on the couch with a tub of frosting and watch real-life surgeries without getting even a little grossed out. Amy was also the only roommate with a car, so we relied on her to take us grocery shopping once a week, and to Idaho Falls occasionally when we just HAD TO GET OUT of Rexburg. Amy was musical, thatrical, sweet, funny, genuine and slow paced; I could count on Amy for a laugh whenever I was down. The only thing about Amy that I didn't like was her Mickey Mouse alarm clock, which ticked so loudly you could hear it from the parking lot. It wasn't long before that clock mysteriously disappeared... hmmm.
- Physical Therapy from Jocelyn: The resident track star, Jos, kept us connected with good looking guys and sports injury remedies. One time I tore every ligament in my ankle, spraining it so badly I had to wear a walking cast and crutches for three months. Jos insisted I plunge my foot/ankle in a bucket of ice to help with the swelling. I have never been in so much pain in my life. The injury didn't even compare to her 'ice torture' but she held me down, sat on me, and made me suffer it. And... she was right; it worked! She did feel bad about the incident and later carted me around on her back when I got sick of the crutches. Jocelyn despised dresses (she even cried when we dolled her up for homecoming). Her diet consisted of raw hot dogs, Saltine crackers with Chiz's brand ranch, and mountain dew. She studied psycology, which was perfect for her because she was (is) such a good listener. Jos is always fun and down to earth, and has the most contageous laugh.
I've had so much fun documenting these memories, and hope all my friends - old and new - know that they're loved and appreciated. I've been so blessed to have the most amazing people in my life at just the right times. I hope I have been able to recirpocate even a little of the friendship to others that I receive from them.
Posted by Unknown at 7:58 PM