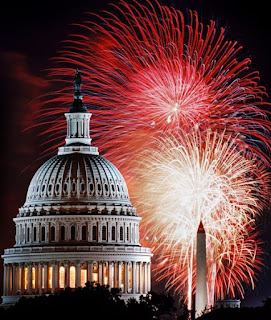 In five days Brian, Chase, and I are heading for Washington DC! It's something I've wanted to do for a long time (I was born there and lived there for twelve years before moving to AZ) and I'm SO excited! I can't wait to show Brian and Chase everything and as a result our itinerary is jam-packed. We will seriously be running our buns off the entire time - it's going to be a blast! Chase learned about DC, George Washington, Abraham Lincoln, the White House, etc. this year at school and really wanted to tour the White House while we were there. We signed up for a tour back in January and after being told by one Congressman that we were put on a waiting list, we just found out from another Senator (we tried every source we could) that we got it! Yay! I feel slightly guilty about leaving Clara behind, but this just isn't the type of trip she'd appreciate - yet. I have to keep telling myself that she will have much more fun here with Zack, Kylee, and her Grandmas then she would have 'not touching anything' at the Smithsonian. And when I think about trying to keep track of her (she has no fear of strangers) on the 4th of July at the Washington DC Mall, my guilt is all but gone.
Posted by Unknown at 9:57 PM